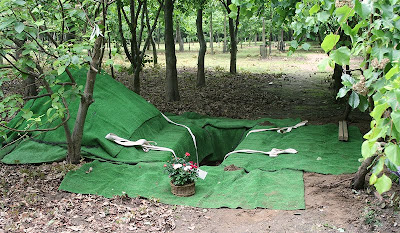 Many people prefer not to think about death, maybe hoping that if they don't think about it, it'll never happen.

I'm fascinated by death - how it happens, how we deal with it, attitudes towards it. I've conducted over a thousand funerals without religion as a Humanist Celebrant, so I've learned a lot about British attitudes to death, dying and bereavement, and a lot of social history. Death doesn't discriminate - it comes to all classes, all ages, all races.

I've read comments elsewhere from both atheists and Christians asserting that humanism is "like a religion", and that the provision of humanist ceremonies proves this. Rite of passage ceremonies date back to the beginning of recorded history and are not specific to any religion or culture. They demonstrate a natural human desire to mark the major events in our lives; birth, coming of age, the formation of bonds (though the history of marriage is a complicated one), and death. People who've died on the battlefield (particularly when their remains can't be found), criminals, and those who have no one to mourn them, have all been denied funerals, but by marking a death with a simple celebration you're showing that this person mattered to you, to his or her family, or to his or her community. This isn't religious; it's simple humanity. I've prided myself on being able to demonstrate that religion is irrelevant and unnecessary for a satisfying funeral. A majority of mourners, including those with a religious faith, seem to agree.

One of these days, I may write a book about my experiences. Meanwhile, there's this blog...

PS: Judging from a couple of comments, some readers may not realise that I'm British, not American.