Henry Allingham, the WW1 veteran who died on July 18th, aged 113, wasn't a religious man. He told the Guardian:

Many of the men who fought in WW1 left their faith on the battlefield. Whose side was God on? many of them asked. So why did the church get to muscle in on Henry's funeral? They didn't have him in life, so they took over when he died? Makes me cross when this sort of thing happens. A funeral should reflect a person's philosophy of life. If religion played no part in it, then it should play no part in his or her funeral. Damn cheek.

A few years ago, I was asked to conduct a private family funeral for the gardening correspondent of the East Anglian Daily Times and BBC Radio Suffolk, Roy Lacey. Roy had told his family that he wanted me to conduct his funeral, as he'd listened to my broadcasts and agreed with what I'd said. Subsequently, the editors of the EADT and BBC Suffolk agreed with the family that they'd like to broadcast a memorial event for Roy, and Mrs Lacey said she wanted me to lead it, as that's what Roy would have wanted. It was recorded at a school in Felixstowe, where Roy lived.

Various people were to provide tributes to Roy, there was a recording he'd made of his personal reminiscences, and we were to play Vaughan Williams' Lark Ascending, which he liked. Then I was told that the event would include The Lords' Prayer. 'Why?' I asked. I can't remember the EADT editor's exact words, but it was something along the lines of, people would expect it, or it would include religious people. But Roy had specifically said that he didn't want any religion at his funeral, I said, and he wouldn't have wanted it now. I seem to remember that Mrs Lacey agreed with me, and the subject was dropped. I still have the recording somewhere. It was a moving occasion, and I don't think that anyone mentioned that anything was missing.
Posted by Margaret Nelson at 11:48 pm 1 comment:

I think it's a waste of money, spending a lot on a coffin. It'll soon be buried or burnt, though some people order theirs in advance, or make one in advance, and use it as a blanket box or cupboard - memento mori furniture.

I'd heard about the elaborate coffins made in Ghana, where coffin-makers aim to make coffins that look like anything their clients choose - cars, guns, fish (see above), animals, vegetables, mobile phones . . . Some of them are so elaborate, they must have to dig very large holes to bury them in. I think the African coffins were originally DIY projects, but have become so popular that they're exporting them.

I was watching the BBC's 'Flog It' TV programme this afternoon, when presenter Paul Martin visited a coffin maker, Vic Fearn & Company, who've responded to requests for more elaborate coffins by taking on a designer who'll create anything you want. This part of the business is called Crazy Coffins. Some of them cost £thousands. If you have one of those, people will remember your funeral, even if they forget who it was for.

Colourful Coffins have a 'pre-design' service; you can design your own coffin, maybe with "Goodbyee!" in big letters along the sides? It might be tempting to send some sort of farewell message to everyone.

There's evidently a market for this sort of thing, which can be very lucrative. The death business always was a money-spinner. When local builders first started making coffins, they were just plain boxes. Then some enterprising characters realised that their more affluent clients would be pleased to pay for better coffins, mourning accessories, professional mourners, fancy hearses, etc., to demonstrate their social superiority. Richard Chandler's trade card, c. 1750, lists what he could provide for a "decent" funeral ("at reasonable rates"), as opposed to a common or garden funeral. If Mr Chandler was alive today, he'd be making crazy coffins.

Kisses at the crematorium

After a funeral today, I had an interesting conversation with one of the staff - one of my fans, especially since I did a funeral for a family member.

He'd been listening, as he was chapel attendant today. He said he always enjoyed my funerals, and the ones that are conducted by my colleague, D. They're how funerals should be, said he. He was never keen on religion, but working at the crematorium and having to listen to so many religious funerals, he's even more atheist than before. I've heard the same complaint from other crematorium staff and funeral conductors (the people from the funeral directors who manage the event) ; religious funerals are all the same; they're irrelevant; they're more about God than about the person who's died; they're boring. Yes, I know they're not all bad, but I hear a lot of negative comments.

My friend said that, soon after he started working at the crematorium, there was a funeral that was to be led by a family member, an American preacher. He used the opportunity to preach hellfire and damnation, shouting at the mourners (several times) that they were all sinners. After about five minutes, the family had had enough. They told him to shut up and sit down. My friend said that made him wonder if his new job was going to be more interesting than he anticipated.

On the whole, however, it hasn't been that interesting. Day after day, week after week, he hears the same hymns, the same prayers, the same stuff about so-and-so going to be with Jesus. No wonder the staff tend to get quite excited when my colleague or I turn up. We aim to provide a ceremony that's relevant and unique, and we often include humorous anecdotes - so there are laughs too. Oh, and the music is better, I'm told. He was delighted when D turned up the other week and announced that the music included Ian Dury and the Blockheads - "There aren't half some clever bastards!"

My colleague, being male, probably doesn't get kissed very often away from home. I get kisses from clients and funeral directors, like the one I got today from the conductor waiting to do the funeral after mine. Few people can claim to enjoy job satisfaction and kisses.

I've been kissed by clergy too. A couple of retired clergy are old friends, including the one who did my parents' funerals. He once kissed me in the vestry, in front of a member of staff, who said in mock horror, "You kissed an atheist!" "That's all right," was the response, "it's not catching." I beg to differ.
Posted by Margaret Nelson at 5:32 pm 2 comments:

When you pop your clogs, you can have your ashes sent heavenwards in a fireworks display. The company says it will be "Celebrating life through the spectacular and tasteful dispersal of cremation ashes by firework." They wisely don't guarantee where the ashes will land, so they possibly take the precaution of not firing any rockets near a motorway or sewage farm, particularly if there's a strong wind. They say "Each firework is labeled [sic] with your loved-ones [sic] name and a named Certificate of Authenticity is provided." Judging from the website, they might not spell the name right, but what does it matter if it's labelled anyway? It'll burn. You can have a "Manned Professionally Fired Tribute Firework Show" from £1,750.00 inc. VAT.

If you don't fancy a firework display, what about being turned into a paperweight? Might as well make yourself useful when you're dead.

Tom Sutcliffe wrote about this sort of thing in The Independent, and how his dog almost peed on a pile of ashes - not quite the dignified ending the family might have wanted. At least a paperweight might not get peed on, unless you carelessly leave it in the loo.

A few years ago, a retired RAF officer told me how a former colleague had requested that his ashes should be scattered from a light aircraft. It proved to be difficult to fulfil his request, as the ashes blew back into the cockpit as fast as they were thrown out. Some were swept up with a dustpan and brush after landing; he didn't say what they did with them. 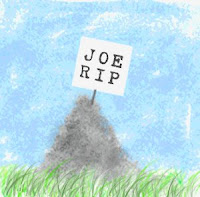 A lot of people choose to have their ashes scattered in places that had special significance for them - on the top of hills, on football pitches, and so on. So many people are doing it these days that it's become a pollution problem and the government had to bring in new anti-pollution rules. Surely the ashes firework displays might be in breach of these rules, as they can't control where the ashes will land?

Carelessly throwing ashes around is as anti-social as littering, it seems to me, and not nearly as "tasteful" and romantic as many people might imagine.

I've been given a small container with some relative's cremains. The rest have been distributed among other family members and in places my relative enjoyed visiting. I didn't ask for them and didn't want them. I think the idea was that they should go in my garden somewhere. When I'm dead no one in the family will have access, since I'm a tenant, so that'll be that. Meanwhile, they sit on a bookshelf. To prove how illogical I am, a box of my last dog's cremains are nearby, to be inherited by my next of kin. Can you imagine them being passed along after my demise? Well, they won't be my problem, will they?

Oh, and I've just learned that it's now possible to have ashes sent into space.
Posted by Margaret Nelson at 11:52 pm 6 comments: