Death from a scientific point of view 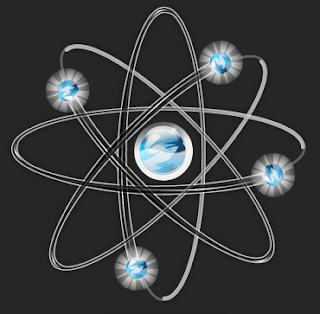 A friend died not long ago. He wasn't a close friend, and I only met him face to face two or three times, but he was the sort of person you don't forget in a hurry, mainly because of his paradoxical character; outwardly a misanthrope but a generous, loving person in disguise. Over the last few years, Simon collected many friends via social media, mainly through Twitter and Facebook, and many of them socialised with him in real life, not just online. His Facebook page is still there and his closest friends are still sharing memories through it. Today I found that one had written a blog post mentioning him and quoting something that made sense to a heathen like me. Simon would have liked it too, as the confirmed atheist that he was. It's by Aaron Freeman, who broadcasts with America's NPR radio station.

And at one point you’d hope that the physicist would step down from the pulpit and walk to your brokenhearted spouse there in the pew and tell him/her that all the photons that ever bounced off your face, all the particles whose paths were interrupted by your smile, by the touch of your hair, hundreds of trillions of particles, have raced off like children, their ways forever changed by you. And as your widow rocks in the arms of a loving family, may the physicist let him/her know that all the photons that bounced from you were gathered in the particle detectors that are her/his eyes, that those photons created within her/him constellations of electromagnetically charged neurons whose energy will go on forever.

And the physicist will remind the congregation of how much of all our energy is given off as heat. There may be a few fanning themselves with their programs as he says it. And he will tell them that the warmth that flowed through you in life is still here, still part of all that we are, even as we who mourn continue the heat of our own lives.

And you’ll want the physicist to explain to those who loved you that they need not have faith; indeed, they should not have faith. Let them know that they can measure, that scientists have measured precisely the conservation of energy and found it accurate, verifiable and consistent across space and time. You can hope your family will examine the evidence and satisfy themselves that the science is sound and that they’ll be comforted to know your energy’s still around. According to the law of the conservation of energy, not a bit of you is gone; you’re just less orderly.

You can hear Freeman read this if you click here.

There have been others who've pointed out that nothing ever disappears completely, and that the stuff we are made of is recycled, including the 17th century French orator, Jacques-Bénigne Bossuet:


All things summon us to death: nature, almost envious of the good she has given us, tells us often and gives us notice that she cannot for long allow us that scrap of matter she has lent. . . she has need of it for other forms, she claims it back for other works.

Bossuet was a bishop and a theologian, so Simon might not have approved of me quoting him, but even bishops have been known to talk sense.
Posted by Margaret Nelson at 2:17 pm 4 comments:

The ways of God are strange!

It's the 100th anniversary of The Battle of the Somme today. The event at The Thiepval Memorial in France shown on TV was moving but although it included a reading from Sassoon and stressed the loss of so many ordinary working men, it didn't make any reference to the cynicism of some soldiers, the desertions, the suicides and the minds wrecked by what we now call "post-traumatic stress disorder", which was then called "shell shock". Yes, there are many tales of heroism under fire, but what about all the other stories?

The Bishop tells us: 'When the boys come back
They will not be the same; for they'll have fought
In a just cause: they lead the last attack
On Anti-Christ; their comrades' blood has bought
New right to breed an honourable race,
They have challenged Death and dared him face to face.'

'We're none of us the same!' the boys reply.
'For George lost both his legs; and Bill's stone blind;
Poor Jim's shot through the lungs and like to die;
And Bert's gone syphilitic: you'll not find
A chap who's served that hasn't found some change.'
And the Bishop said: 'The ways of God are strange!'

Posted by Margaret Nelson at 3:42 pm No comments: