Portraits of the dead

I go to the BP Portrait Award Exhibition at the National Portrait Gallery every year. My son agrees with me that the standard keeps getting higher. It will be interesting to see Daphne Todd's portrait of her mother this year. It was painted after death. Annie Mary Todd was a hundred years old and her dead body is as you'd expect - emaciated and worn out, an empty shell.

There will be people who'd prefer not to see it; the fear of death is common and they'd rather not be reminded of it. Some will be repelled, others fascinated. Mrs Todd agreed to be painted after she'd died, so this isn't posthumous exploitation.

Posthumous portraits were once quite common, though they were usually painted to show an idealised version of a deathbed scene. When Sir Kenelm Digby's wife Venetia died in 1633, he sent for his friend the artist Sir Anthony Van Dyck to draw her. Seven week's later, he finished this portrait, which "played an important role in Kenhelm's mourning" (from Death in England, ed. Peter C Jupp & Clare Gittings). 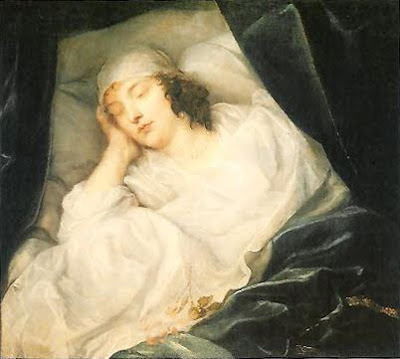 I've drawn a relative on her deathbed at the hospice. I've also drawn dead babies for bereaved parents. They were invited by hospital staff to hold their baby and have his or her photograph taken, but the photos of a tiny premature scrap weren't suitable to show in a frame on their mantelpiece. Pencil drawings, without the livid colour of the tiny bodies, was a gentler way to remember them. I don't charge for them.
Posted by Margaret Nelson at 11:59 am 4 comments: