The dead outnumber the living, and they take up a lot of space

Cremation was first introduced, against considerable opposition, as a hygienic method of disposal and a solution to the problem of over-crowded municipal cemeteries in conurbations. Some people keep ashes on their mantelpiece, but most either bury or scatter them. Scattering has led to problems, so that the government had to bring in new anti-pollution rules. Meanwhile, space for burials is still running out. However you look at it, and many would prefer not to, the problem can only get bigger. Trouble is that whenever the prospect of reusing graves is mentioned, bereaved relatives get very het up about it. Lucy Townsend has written a piece for the BBC News Magazine about the subject:


This situation is not universal. In some countries a more pragmatic approach to human remains means they have largely avoided the overcrowding issue.

In Germany, graves are reused after only 30 years, the existing remains usually being exhumed and cremated. In Australia and New Zealand, "dig and deepen" is carried out in urban areas as a matter of routine.

Tim Morris, chief executive of the Institute of Cemetery and Crematorium Management, says it is time to change tack.

"It's a no-brainer," he says. "Re-use is common in lots of other countries, and was common practice in the UK until the 1850s."

Resistance to change is usual - people will refer to "traditions" that are only decades old - but when it comes to death, resistance can be expressed very emotionally and politicians will hesitate to confront it. However unpopular it is, they're going to have to.
Posted by Margaret Nelson at 6:48 pm No comments:

You can't take it with you - or can you? 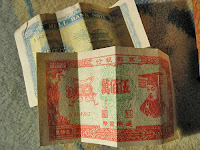 It's been a tradition in many cultures for gifts to be given to the dead, to be buried with them. Egyptian tombs were filled with everything a god king could want, to ensure a comfortable afterlife. The Anglo-Saxon king buried at Sutton Hoo in Suffolk had some lovely treasure buried with him. Nowadays, it's less likely that items of great value will be buried or cremated with people's remains, but I have heard of funeral directors searching coffins after someone had been to view a corpse, when they suspected that something might have been secreted under the covers. A bottle of scotch, for example, isn't something you want to end up in a cremator. In some cultures, it's expected that someone's creditors will settle their debts in coin, to be placed in the coffin. I was told that one family didn't appreciate it when a creditor tried to put a cheque in the coffin.

Due to a misunderstanding, I was once asked to officiate at a Chinese funeral. They really didn't need me at all, I realised. Communication was very difficult, as most of them spoke no English. After a brief ceremony in the crematorium chapel, the main ceremony was at the graveside, where a generous amount of paper money was burnt. I don't remember much about it, but do remember that the money wasn't real. You can buy all sorts of paper imitations of money and other goods for Chinese funerals. It seems that the New York police aren't very culturally aware, since one of them arrested a Chinese shopkeeper for selling an obviously fake $20 cardboard handbag that wouldn't fool anyone who was looking for a genuine Burberry bag. Poor Mr Wing Sun Mak was charged with two counts of copyright infringement in the third degree. Stupid policemen.


The store, Fook On Sing Funeral Supplies, on Mulberry Street along what is known in Chinatown as Funeral Row, sells traditional objects of mourning, mostly copies of luxury objects. The items are made of cardboard, paper and plastic, to be used at funerals as symbolic gifts for the deceased. The cardboard models are burned as part of traditional Chinese funeral practices.

The store sells a cardboard mansion for $400 and a cardboard flat-screen television for $40. There are stacks of money ($10,000 bills) for sale, as well as miniature sports cars, cellphones, double-breasted suits and even smiling dolls to act as servants in the hereafter.

“When people die, they feel they are going to need things in the next world,” explained one of the store’s owners, Amy Mak-Chan, who is the arrested man’s aunt. “They might want a car and a house and other nice things. People buy these things here, to give them as gifts at the funeral.”


The paper offerings represent objects, animals or people that the deceased liked, and burning them ensures they will reach the deceased in the after-world.­

Posted by Margaret Nelson at 3:34 pm No comments:

The new crematorium just outside Ipswich has been open for nearly a year and is increasingly popular. Some might say that "popular" isn't a good word for a crematorium, but since you've got to have funerals, they may as well be in a pleasant venue.

One feature is the extra-large cremator, which means that very big bodies no longer have to be driven miles from here for disposal.

They had an open day recently, to "dispel myths", where they sold cream teas to raise money for the children's hospice.
Posted by Margaret Nelson at 11:17 pm No comments: