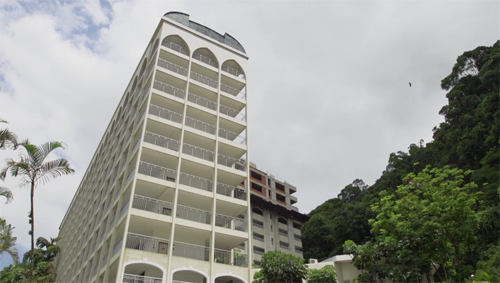 This is the Memorial Necrópole Ecumênica in Santos, Brazil, a mausoleum housing thousands of bodies. I suppose that buildings like "the world's tallest cemetery" might appeal to planners in places where burial space is limited or unavailable, but I can't see British local authorities approving them, even if they were only a few storeys high. Can you imagine the fuss from the nimbys?

Bodies placed into crypts above ground decompose in a small space, releasing fluids and gases. If they're not properly sealed they can explode, as has happened. It's been described as a "clean and dry" way to dispose of the dead, but it's anything but. It's certainly not environmentally-friendly and won't appeal to those who want to be returned to Nature, as a corpse buried in the ground is. It's ironic that the crypts in this building facing a pleasant view of the surrounding hills attract a higher price, while no one is encouraged to think about the reality of the process. Yuk. No thanks.

Click here to see a short film about the building.
Posted by Margaret Nelson at 11:16 am No comments: