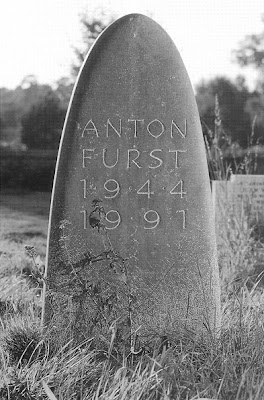 My Twitter friend DD has posted something on her blog about the Arundel tomb, which made me wonder how many modern memorials will evoke the same sort of emotion in seven hundred years time? Maybe some of the ones commissioned through Memorials by Artists?

Harriet Frazer started Memorials by Artists in the late 1990s after she and her family had had great difficulty finding a headstone they liked for the grave of her step-daughter Sophie Behrens, who died in 1985. They wanted something beautiful and unique, like Sophie. It wasn't just a matter of finding craftspeople who could produce what they wanted, rather than something out of a catalogue. They also learned by trial and error about all the rules and regulations that cemeteries impose. Harriet and her family thought that other families might benefit from their experience, and that led to Memorials by Artists. They don't just put families in touch with sculptors and letter cutters; they can help with stained glass artists and other craftspeople too.

The photo from the Memorials by Artists booklet shows a headstone made from Kilkenny limestone by Jamie Sargeant. A theatre set design by Anton Furst is incised on the back.
Posted by Margaret Nelson at 6:31 pm No comments: 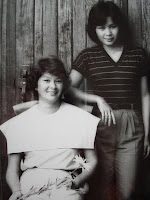 One of my Twitter contacts, Meg, has just written an account of the death of her mother in an earthquake in her native Philippines, nineteen years ago. It ends -

After the funeral was over, the heavens opened and torrential rain came down thick as stair rods. My grandmother finally collapsed, wailing that her daughter would be soaked. The fact that my mother was dead and buried in a coffin six feet in the ground meant nothing to Lola. She could not be consoled. I held my grandmother's prostrate body in my arms, neither of us able to fully comprehend the loss of the woman who bound us together with a chain of kinship, history and love.

Only then did I remember it was my birthday. The day the earth claimed my mother a second time, I turned thirty.

The photo is of Meg (standing) and her mother Daisy, taken in 1983.
Posted by Margaret Nelson at 8:45 pm No comments: