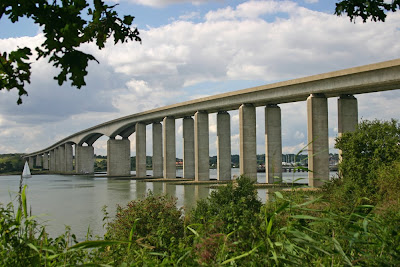 I've conducted several funerals with connections to this bridge, which was opened in 1982 to carry the A45 (now the A14) over the River Orwell at Ipswich. I've driven over it hundreds of times.

One funeral was for someone I knew; a very interesting man who'd been a member of the council responsible for commissioning its construction. He was proud of the curved arch in the middle, which was his suggestion. He thought it added something, aesthetically. Another funeral was for an engineer who was involved in its construction. He was equally proud of the bridge.

Sadly, many people around here associate the bridge with suicides. It's been a magnet for depressed people since it opened, the latest only a few weeks ago. I remember conducting the funeral for a young man who'd been plagued by mental illness for years. His family had been happy that he seemed to have responded to treatment, and was planning to spend some time with friends in Spain. They waved goodbye at the door of their home, after he'd refused the offer of a lift to the airport, oblivious to the fact that it was all an act. He went to the bridge and jumped over the low wall at the top, just as a school bus full of children was going past. They all needed counselling afterwards, including the driver.

I was reminded of this the other day, when I noticed that there was a TV programme about suicides on London Underground, and their consequences. I couldn't bring myself to watch it. When I was a relative funerals novice, I shared a car with a young man who'd gone to work for a funeral director after he left school. He was glad to have the job, he said, because several of his friends were unemployed. I asked if he enjoyed it. He replied that he did, most of the time. One thing he didn't enjoy was walking along a railway line, gathering the body parts of a suicide. Suicides are notoriously oblivious to the effect that their actions have on other people.