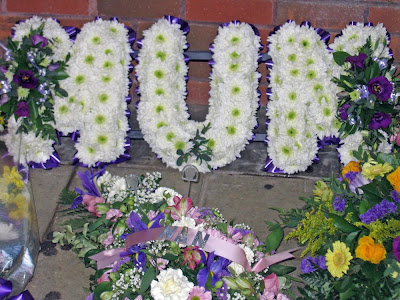 White chrysanthemums are popular with funeral florists, who use them to spell out tributes for "MUM", "DAD", and various other names or relationships.

Some funeral flower facts for you:

White chrysanthemums are associated with funerals in Eastern Europe and in China, Japan and Korea.

Floral tributes became popular here from the 19th century, partly for their symbolism, but also because they were used, with aromatic herbs like rosemary, to try to hide the smell of putrescent bodies.

After the Hillsborough disaster in 1989, it became increasingly popular to lay floral tributes for strangers at the site of car accidents, murders and disasters. The florists did very well out of Diana Princess of Wales' funeral, when thousands of flowers were heaped in the streets of London.

Some of the nicest floral tributes I've seen were informal ones that had been picked from mourners' own gardens. White chrysanthemums don't lend themselves to informality.
Posted by Margaret Nelson at 12:38 am 2 comments:

It's time to re-educate the funeral directors, again 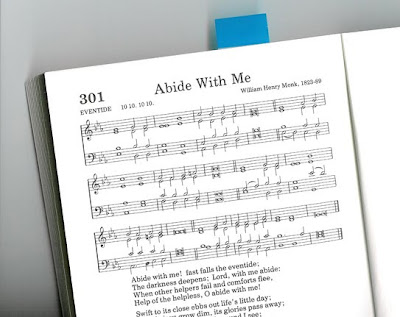 Funeral arrangers are the people in a funeral director's office who interview clients and make the arrangements. They're the ones who contact us to ask if we'll do a funeral for a client who doesn't want a religious ceremony. At least, that's how it's supposed to work.

We send all the funeral directors in our area a newsletter every year or so, to inform them about our service and remind them what we will or won't do. With staff changes, some need re-educating periodically.

One of our biggest problems is the arrangers who book a venue (such-and-such a crematorium at 11am on Tuesday, say) before they contact us. When it's a fait accompli, there's not much we can do if all of us are already committed elsewhere. There've been times when I've had to tell an arranger, sorry - we can't help you.

Then there are the ones who don't really understand what a humanist funeral is. Their client might have said that they don't want a religious funeral, but they still choose to sing hymns, for example. I've known clients say, "But it's not really religious, is it?" about Abide with Me, Jerusalem, or Morning has Broken. Don't they ever listen to the words? If the arranger is doing his or her job properly, he or she should know better than to steer people like that in our direction. They need a civil celebrant, who's not much fussed about what we call "pick 'n mix" funerals, or one of the many freelance celebrants who'll do the same.

This morning I had an email from an arranger who'd asked me to do a funeral a few days ago. I'd queried whether the client had chosen any music. The email listed four hymns! I spoke to the client on Tuesday. I asked, "You do understand that I provide a funeral that's totally free from religion, don't you? No hymns, prayers, religious readings, or references to an afterlife?" "Yes," he said, "that's what we want. Mum wasn't religious." I haven't been able to get hold of him again today, so far, but what seems to have happened is that the arranger has handed him a list of recorded music and said, "You can choose from this." Not appreciating that they can have anything they want (and I mean anything - the new Wesley system means access to an almost unlimited number of recordings), the client opted for the hymns because he thought that was usual, or didn't have a clue what he wanted.

Meanwhile, I've been backed into a corner by another client, who insists that we sing Jerusalem because her husband loved the song. I can see that this is going to be one of those weeks.
Posted by Margaret Nelson at 1:15 pm 14 comments: