Making room for the dead 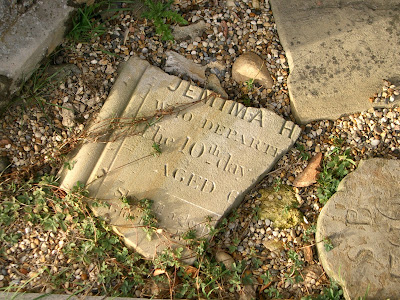 The news that most British cemeteries are either full, or nearly full, shouldn't be a surprise. The population continues to grow, and so does the demand for burial space. Cemeteries can be fascinating places, with historically interesting headstones and thriving wildlife, but it makes no sense to expect to stake your claim to a burial plot and expect it to remain yours in perpetuity. Many graves are neglected, forgotten or ignored by the descendents of those who occupy them, while the newly dead must be buried wherever there's room. 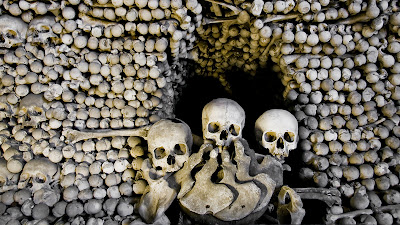 Maybe it's time to coax the squeamish into considering burying people long enough for full decomposition, before exhuming the bones and storing them in an ossuary? Neatly stacked bones take up far less space than bodies.

Of course there's cremation, which is popular here and in Japan, but even with efficient new cremators, it's not an environmentally-friendly option. Other new methods of disposal include bio-cremation and freeze-drying, but they still use energy, which is also is increasingly short supply.

Dealing with the problem of burial space shortages means dealing with death and with the population problem; two subjects that most people would rather not know about. It's not going to be easy.

Here lies father and mother and sister and I,
We all died within the space of one short year;
They all be buried at Wimble, except I,
And I be buried here.

Headstone in a Staffordshire churchyard.

Photo of headstone fragments by the wall of St. Peter's Church, Elmsett, Suffolk © M Nelson.
Photo of bones in an ossuary in Sedlec near Kutná Hora in the Czech Republic from the Czech Tourism website.
Posted by Margaret Nelson at 1:56 pm No comments:

I've heard that, before the law was changed to prevent pollution, the dead could be cremated in all sorts of unsuitable outfits. One example was a farmer who was cremated wearing his wellies; the burning rubber smell must have drifted around the area and probably didn't do the cremator much good. Similarly unsuitable outfits were worn by those being buried; man-made fibres don't biodegrade. Now there are rules about the materials that can be used to line a coffin and dress a corpse, but some clothes may still make it tricky. Fiddling about with buttons on a body isn't easy. If you're not expecting to view the body, what does it matter what it's wearing? The funeral director will take their usual shroud off a shelf, and you'll never see it. But if you do want to be seen by your dearly beloved, you might want to look as good as possible, bearing in mind you won't be at your best. I wouldn't want to be embalmed, which is far more popular in the US than here; that's about creating an illusion. So Pia Interlandi's clothes for the dead are a good idea. They're made from fabrics that will rot as the body rots after burial; they've all been tested on pig corpses.


“The body is a gift,” Interlandi says. “It’s a big bag of nutrients and water and protein. When you place it back into the earth, I think the garment is almost like wrapping paper.”

This story reminded me of Mr Bun. I was visiting a funeral director after interviewing Mrs Bun about her husband's funeral. My undertaker friend was keen to show me around the premises. Standing over an open coffin in the morgue, she patted the skinny corpse's knee and said, "This is Mr Bun." His face was veiled by white lace, as though partially gift wrapped. Knowing what I did about Mr Bun, having just heard his life story, it seemed bizarre to cover him in the sort of lace you'd see in a bridal veil. He wouldn't have been seen dead in it.

HT to @megatonlove for the link.
Posted by Margaret Nelson at 2:35 pm No comments: