A serious case of denial

The remains of a baby boy that have been kept in a mortuary for 21 years will be buried on Friday without any relatives present after his family withdrew their consent for the funeral to go ahead.

Christopher Blum's parents have refused to bury their son, who died when he was four months old, because they dispute the cause of his death.

A pathologist named sudden infant death syndrome (Sids) as the cause, but Christopher's parents believe it was linked to a triple vaccination he received hours before his death.

Enfield council will bury the boy's remains in a north London cemetery whether his family are there or not.

21 years! That little bundle has been stuck at the back of a freezer all that time, because his father wouldn't accept the results of the post mortem examinations. After so long, the father's refusal to go ahead with the funeral seems more to do with his resentment towards Enfield council than with a realistic expectation of new forensic evidence. It's very sad, but that man needs to see a shrink.

Posted by Margaret Nelson at 1:04 am No comments: 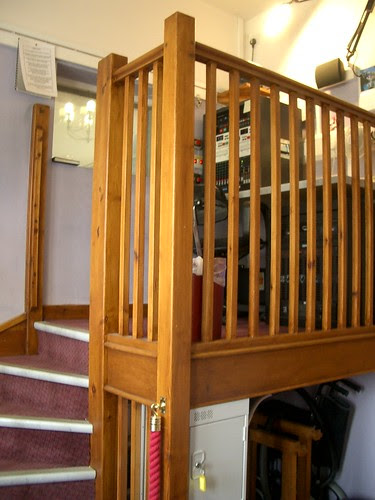 Behind the mirror, originally uploaded by Sparrows' Friend.

I took this photo at a nearby crematorium. There's a one-way mirror at the back of the chapel. On the other side is the vestry, where the chapel attendant can hear and see what's going on, play the music system when required, and get ready to tidy up at the end of a ceremony. The mourners can't hear anything from the vestry. The platform is because the mirror is high up for the best view. You can see more of my death-related photos on Flickr.

On the Guardian website, there's a collection of photographs taken by Laura Peters behind the scenes at mortuaries, funeral parlours and crematoria for her exhibition, Behind the Last Closed Door.

You can see some of the sort of things she photographed at one of Ipswich Crematoria's open days. There's a 360° panorama of the business side of its chapels on the BBC Suffolk website.

Posted by Margaret Nelson at 12:47 am No comments:

Sticky carpet situations, and other messes

"Sticky carpet situations" was how a housing officer I used to know described some of the homes that she was required to visit. I knew exactly what she meant.

Sticky carpet situations are where your shoes make a sort of sucking noise as you walk in, as the soles peel off the carpet with each footstep. When invited to take a seat, you look around for an un-upholstered chair without any wet patches or obvious stains. I have recklessly sat on a settee, the only available place to sit (apart from a sticky carpet), and found that when I arose, my rear was damp, and it wasn't me.

In such homes, I usually decline a drink. "Tea?" "No thanks," I'll say, imagining the mug might have been cleaned, if at all, with a cloth and some spit. They remind me of a landlady I had, years ago, as an art student. I lived in a flat above their filthy kitchen, where her emaciated husband, who'd been a prisoner of the Japanese and suffered chronic digestive problems ever since, toyed with the food she served for his dinner, anticipating the frequent trips to the bathroom that would inevitably result. I suspected that her unhygienic cooking methods contributed more to his poor state of health than the Japanese ever had. But I digress.

I've found myself in situations where there's been livestock in the room, and I don't mean dogs and cats and a liberal itch of fleas. One house had a colony of guinea-pigs in a corner of the kitchen, whose squeals interrupted us. Another had a very smelly rabbit hutch, with a very sad-looking rabbit, in the corner.

In sticky carpet situations, the people have lived chaotically, so it's not surprising that the man or woman whose funeral they've been arranging have also lived that way. Some would be funny, if it wasn't so tragic. Imagine the lack of imagination of a family who accepted a top flat in a tower block from the council, knowing that one of them was a chronic depressive who'd attempted suicide several times. Guess how she died. Imagine the sheer stupidity of a man with a girlfriend and two small children who got very drunk, stole a car, crashed it on a busy slip road, and then wandered onto the road to be run over by two large lorries, one after the other. His girlfriend couldn't understand why the funeral director didn't want her to see the body. Imagine visiting a drug dealer whose front door was made of reinforced steel, and being invited to sit on the bed, the only place in the room that wasn't covered with junk. His girlfriend had committed suicide. I could see why she'd have wanted to. Imagine the family of a murder victim who lived in a tiny seaside chalet, where the victim's mother chain-smoked and the victim's small son played on a sticky carpet. The room was dominated by a huge TV and an enormous chip pan, balanced on the edge of a Baby Belling stove. How would that child grow up? Would he be a murderer, like his father? Imagine preparing the funeral for a teenage boy who'd deliberately string a wire between two posts so he could show off on his motorbike by ducking underneath it at speed, only to almost decapitate himself. He was always a laugh, they said. There are people who live dangerously from choice, such as mountaineers, and there are people who just self-destruct. Sometimes they wreck other people's lives too.

When chaotic lives end, I've sometimes got the impression that a fair proportion of the mourners (if there were many mourners) have turned up just to make sure that he or she really is dead and they don't have to deal with the spillage of chaos any more. Sticky carpets are the least of their worries.
Posted by Margaret Nelson at 12:53 am 3 comments: