Would you want to share the funeral of someone you loved with lots of other families, while a bunch of priests went on about God and said nothing about the person you'd lost? Rows of coffins, plenty of priestly platitudes, a papal message about feeling "spiritually present", but no memories, no affectionate tributes. No. Me neither.
Posted by Margaret Nelson at 12:56 am 1 comment: 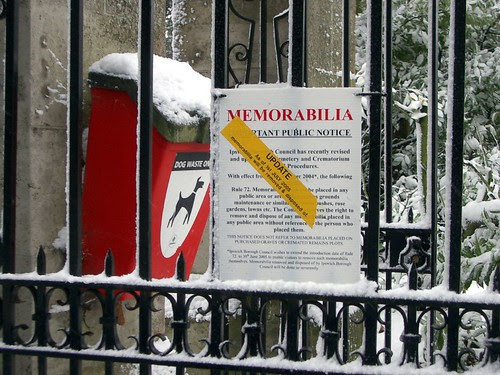 I was talking about soggy teddy bears, wind chimes, plastic flowers, windmills, toys, and football shirts with one of the Ipswich cemetery staff, and he said he thought it began after the Hillsborough disaster, when fans left scarves and flowers at the football club gates.

I've previously written about the waste of money when Diana died, and London's streets were full of dead flowers and stuffed toys.

This photo's on Flickr, where a contact wrote, "Having seen the hideous stuff in Bury St Edmunds Crematorium I'm not surprised. I used to think vicars were being snobbish in their limitations over graves; Bury's gardens of remembrance have put me clear on that."

It's all so tacky. Leaving flowers on a grave has been enough, until recently, to signify that someone is missed, and that his or her nearest and dearest are keeping his or her memory alive. What does a pile of tat say about someone? Nothing, but it does say a lot about how people who struggle to express their loss will imitate one another without really thinking about it. It's what Richard Dawkins calls a "meme", like the fashion for wearing baseball caps back to front. I don't know how long this fashion will last, but I hope it's not long.