An inventory of body parts 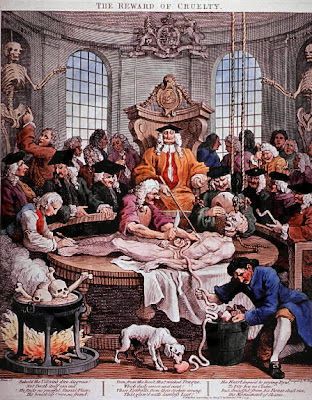 Before the Anatomy Act of 1832, superstitious people who lived anywhere near a medical school dreaded the Resurrection Men, who stole corpses for the anatomists. The supply of corpses from executions was insufficient for the surgeons to learn their trade, so they asked few questions of the men who supplied them with cadavers that were often dug up from fresh graves.

What people feared the most was that the dismembered bodies, after the anatomists had finished with them, would be unfit for entry into Heaven - to be resurrected into that happy (if tediously boring) state, you had to have all the parts. It didn't help that paintings and cartoons of the time showed a casual disregard for the integrity of the cadavers, with dogs eating discarded pieces of the bodies.

I was reminded of this a few years ago, when the Alder Hey Children's Hospital story broke. Some bereaved parents demanded the "body parts" (often no more than slivers of tissue) of the children and had second funerals for them.

Now it's all being resurrected again. It wasn't usual for relatives to be asked or informed when pathologists retained tissue for research purposes from dead Sellafield workers in the 1970s, and later. This may have been due to medical arrogance, but it never occurred to them that there'd be a problem. Now it appears they kept "body parts" too. I can't help feeling that this is a lot of fuss about nothing, but it will give a bunch of lawyers plenty to do. The compensation culture hadn't developed in the '70s.

What next? What about all those toenail clippings, casually abandoned on a bathroom floor? Or the various bits that have been trimmed away on the operating table? We shed body parts throughout our lives. I suppose that those who're upset about "the unauthorised use of body tissue from Sellafield nuclear workers" are most hung up about the lack of permission. Do they believe all that old tosh about being refused entry to Heaven without all their bits? If not, let it go. If they do, I feel sorry for them.

The anatomists are welcome to my body parts. All of them will be donated to Cambridge University's Anatomy Department. I'm not expecting a resurrection.
Posted by Margaret Nelson at 3:55 pm No comments: